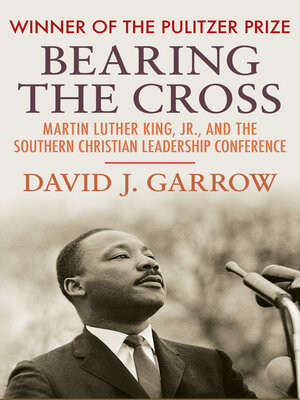 View more libraries...
Winner of the Pulitzer Prize: The definitive biography of Martin Luther King Jr.
In this monumental account of the life of Martin Luther King Jr., professor and historian David Garrow traces King's evolution from young pastor who spearheaded the 1955–56 bus boycott of Montgomery, Alabama, to inspirational leader of America's civil rights movement. Based on extensive research and more than seven hundred interviews, with subjects including Andrew Young, Jesse Jackson, and Coretta Scott King, Garrow paints a multidimensional portrait of a charismatic figure driven by his strong moral obligation to lead—and of the toll this calling took on his life. Bearing the Cross provides a penetrating account of King's spiritual development and his crucial role at the Southern Christian Leadership Conference, whose protest campaigns in Birmingham and Selma, Alabama, led to enactment of the landmark Civil Rights Act of 1964 and Voting Rights Act of 1965.

This comprehensive yet intimate study reveals the deep sense of mission King felt to serve as an unrelenting crusader against prejudice, inequality, and violence, and his willingness to sacrifice his own life on behalf of his beliefs. Written more than twenty-five years ago, Bearing the Cross remains an unparalleled examination of the life of Martin Luther King Jr. and the legacy of the civil rights movement.