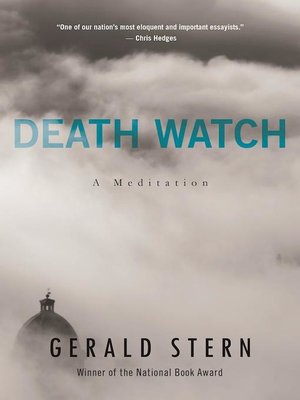 A View from the Tenth Decade

Gerald Stern, National Book Award-winning poet, creates a powerful new prose book in his ninth decades, as he contemplates mortality. In his characteristic audacious, uncompromising, funny, and iconoclastic style, Stern looks back at his life and forward to how he will end his days.
Will he be cremated—against the tenets of Judaism—or buried, and if buried where? He visits synagogues to find answers to questions that are unanswerable. He examines his identity—a Jew born of immigrant parents and raised somewhat haphazardly in Pittsburgh, on account of the death of his sister, Sylvia, at ten, when the author was eight years old.
Her death lingers over Death Watch, as much as the author's own inevitable demise.
Stern wrestles with his identity in Judaism, his name uprooted from its origins, as so much of his life will be willfully disrupted from the expectations of his parents and the norms of a predictable path. Stern recounts his life, itself “a grand digression," which takes him from Pittsburgh, to the Army, to Paris on the GI Bill, and back to the US, where he immerses himself in the literary culture around him.
Death Watch – which Stern describes as an account of a final journey – reads instead as a vivid, passionate, and, at times, whimsical look at the gamble of living life to its fullest, choosing the life of a poet, philosopher, prophet, lover, radical, and perpetual trouble-maker.
He revels in his past love affairs, the many women beloved in his life. He recollects books that occupy his recent reading—the work of W.G. Sebald, Blaise Cendrars, and Louis-Ferdinand Céline—and how memory is always at the heart of literary accomplishment and what creates the staying power of great literature.
Stern's early and traumatic loss of his older sister provides the occasion to imagine what her life might have been had she lived. Sylvia, the painful loss, which his family refused to talk about, erasing her life, as they erased her death in their inability to cope with its magnitude. Sylvia, nonetheless, lives on with Stern—his everlasting muse, his eternal companion.
In a lighter vein, the author tells about his misbehavior—beginning in the sixth grade when he discovers his teacher wears a wig to cover her bald head, a secret he immediately spreads to the entire school. On a visit to Camden, New Jersey, he visits the Whitman home and takes a moment to lie down in Whitman's bed. In the William Carlos Williams Library, he walks out with Williams's hat, which on second thought he returns to its rightful place. As a teacher at Temple University, he lectures the institution's president in front of a faculty assembly on the mistakes in grammar and English usage he made in addressing the meeting. But while walking the edge, speaking out for justice, Stern never falters in his commitment to poetry, his dedication to writing, and his championing of fellow writers.
Death Watch gives us a writer at the peak of his powers—no holds barred. Stern joins the likes of writers such as Tony Judt, Oliver Sacks, Jean-Dominique Bauby, and Randy Pausch, who, while contemplating mortality, celebrate lives lived in full tilt. In the case of Gerald Stern, his memoir portrays a life lived at the edge of boundaries, with the intoxication of poetry and love, and with the compassion of a writer who ends DEATH WATCH with a celebration of orangutans.

Death Watch
Copy and paste the code into your website.
New here? Learn how to read digital books for free