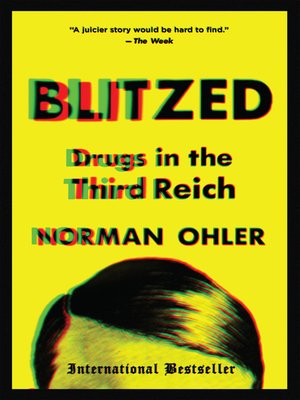 View more libraries...
A New York Times bestseller, Norman Ohler's Blitzed is a "fascinating, engrossing, often dark history of drug use in the Third Reich" (Washington Post).
The Nazi regime preached an ideology of physical, mental, and moral purity. Yet as Norman Ohler reveals in this gripping history, the Third Reich was saturated with drugs: cocaine, opiates, and, most of all, methamphetamines, which were consumed by everyone from factory workers to housewives to German soldiers.
In fact, troops were encouraged, and in some cases ordered, to take rations of a form of crystal meth—the elevated energy and feelings of invincibility associated with the high even help to account for the breakneck invasion that sealed the fall of France in 1940, as well as other German military victories. Hitler himself became increasingly dependent on injections of a cocktail of drugs—ultimately including Eukodal, a cousin of heroin—administered by his personal doctor.
Thoroughly researched and rivetingly readable, Blitzed throws light on a history that, until now, has remained in the shadows.
"Delightfully nuts."—The New Yorker