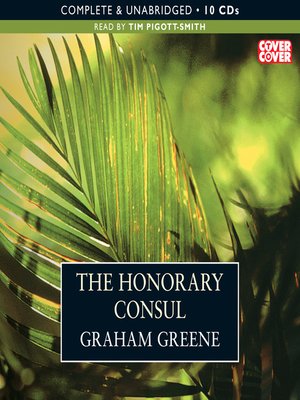 The gripping tragi-comedy of a bungled kidnapping in a provincial Argentinian town tells the story of Charley Fortnum, the 'Honorary Consul', a whisky-sodden figure of dubious authority, who is taken by a group of revolutionaries.

As Eduardo Plarr, a local doctor, negotiates with revolutionaries and authorities for Fortnum's release, the corruption of both becomes evident.

Graham Greene was born in 1904. He worked for four years as a sub-editor on The Times, and as well as his many novels he wrote several collections of short stories, four travel books, six plays, three books of autobiography, two of biography, and four books for children. Graham Greene died in 1991.

One of this country's best known actors, Tim Pigott-Smith has performed many times at the National Theatre in such productions as Coming into Land and Antony and Cleopatra, as well as School for Scandal and As You Like It at the Bristol Old Vic. He also appeared on TV in The Vice and The Jewel in the Crown, while on film he has been seen in Gangs of New York, The Remains of the Day and Quantum of Solace.