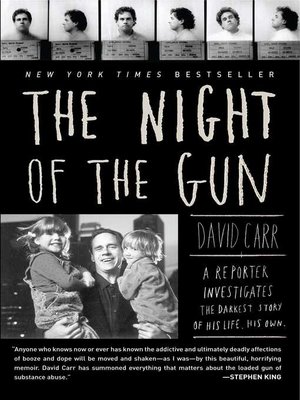 The Night of the Gun

A reporter investigates the darkest story of his life. His own.

Biography & AutobiographyNonfiction
From David Carr (1956–2015), the "undeniably brilliant and dogged journalist" (Entertainment Weekly) and author of the instant New York Times bestseller that the Chicago Sun-Times called "a compelling tale of drug abuse, despair, and, finally, hope."
Do we remember only the stories we can live with? The ones that make us look good in the rearview mirror? In The Night of the Gun, David Carr redefines memoir with the revelatory story of his years as an addict and chronicles his journey from crack-house regular to regular columnist for The New York Times. Built on sixty videotaped interviews, legal and medical records, and three years of reporting, The Night of the Gun is a ferocious tale that uses the tools of journalism to fact-check the past. Carr's investigation of his own history reveals that his odyssey through addiction, recovery, cancer, and life as a single parent was far more harrowing—and, in the end, more miraculous—than he allowed himself to remember.

Fierce, gritty, and remarkable, The Night of the Gun is "an odyssey you'll find hard to forget" (People).
Biography & AutobiographyNonfiction

David Carr was a reporter and the “Media Equation” columnist for The New York Times. Previously, he wrote for the Atlantic Monthly and New York magazine and was editor of the Twin Cities Reader in Minneapolis. The author of the acclaimed memoir, T...

More about David Carr
The Night of the Gun
Copy and paste the code into your website.
New here? Learn how to read digital books for free