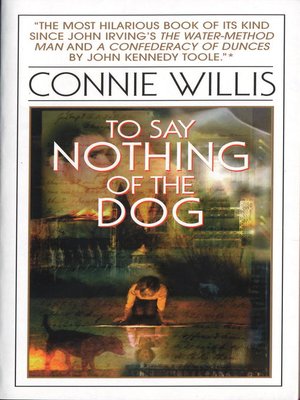 To Say Nothing of the Dog

FictionScience FictionHistorical Fiction
From Connie Willis, winner of multiple Hugo and Nebula Awards, comes a comedic romp through an unpredictable world of mystery, love, and time travel . . .
Ned Henry is badly in need of a rest. He's been shuttling between the 21st century and the 1940s searching for a Victorian atrocity called the bishop's bird stump. It's part of a project to restore the famed Coventry Cathedral, destroyed in a Nazi air raid over a hundred years earlier.
But then Verity Kindle, a fellow time traveler, inadvertently brings back something from the past. Now Ned must jump back to the Victorian era to help Verity put things right—not only to save the project but to prevent altering history itself.
FictionScience FictionHistorical Fiction

Connie Willis has won six Nebula and Six Hugo Awards (more than any other science fiction writer) and the John W. Campbell Memorial Award for her first novel, Lincoln's Dreams. Her novel Doomsday Book won both the Nebula and Hugo Awards, and her ...

More about Connie Willis
To Say Nothing of the Dog
Copy and paste the code into your website.
New here? Learn how to read digital books for free