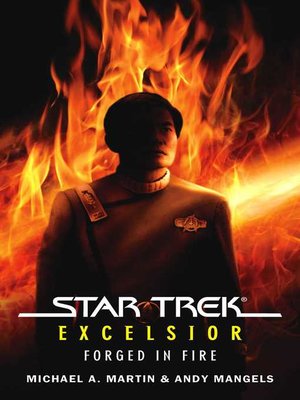 FictionLiteratureScience Fiction
Discover how Sulu rose to the captaincy of a starship in this Star Trek adventure set during The Original Series era.
A vicious pirate known as the Albino is cutting a deadly swath across space, creating turmoil in the Klingon Empire that threatens to spill into the Federation. But this criminal also has a secret that could shake the halls of Imperial power, and his genocidal plans against the race that bore him will have consequences even he cannot imagine, as several unlikely allies join swords to bring the Albino to justice: Hikaru Sulu of the U.S.S. Excelsior; Klingon captains Kor, Koloth, and Kang; and a hotheaded young Federation diplomat named Curzon Dax. Tempered in the flames of their shared adversity, a captaincy is forged, a Blood Oath is sworn...and a hunt begins that will stretch from one generation to the next.
FictionLiteratureScience Fiction

More about Andy Mangels
Forged in Fire
Copy and paste the code into your website.
New here? Learn how to read digital books for free