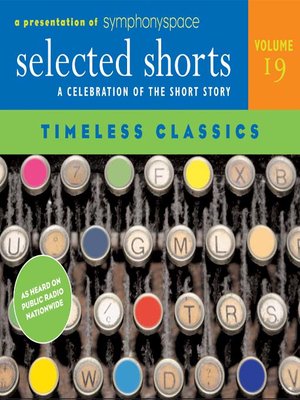 This 2007 Audie Award finalist features more than three hours of some of the greatest shorts stories of all time.

James Thurber's The Night the Ghost Got In

Comic Mayhem is unleashed when a family hears a ghost in the night - and calls in the police.

Two women reflect on romance and intrigue, long ago in Rome.

Danger, adventure, corruption and secrecy dog a ship as it rounds Cape Horn.

A dark fable of a magical toy helping a little boy cope with family troubles.

In Jackson's classic nightmare of society and sacrifice, someone will be the chosen one.

Richard Connell's The Most Dangerous Game

A meditation on what it means to be a hunter - or the hunted, this tale unfolds on a remote island full of strange prey.

A subtle and intimate portrait of a man during a visit from his wife's blind friend.

Selected Shorts is an award-winning, one-hour program featuring readings of classic and new short fiction, recorded live at New York's Symphony Space. One of the most popular series on the airwaves, this unique show is hosted by Isaiah Sheffer and produced for radio by Symphony Space and WNYC Radio.