audiobook ∣ Selected Shorts: A Celebration of the Short Story 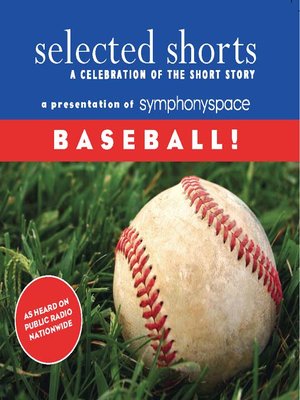 The perfect gift for baseball fans! Featuring rare reading and commentary by Roger Angell and the late great commissioner of baseball A. Bartlett Giamatti

Roger Angell and A. Bartlett Giamatti's Play By Play

Robert Francis' Pitcher and Base Stealer

Robert Fitzgerald's Cobb Would Have Caught It

read by the author

The classic description of the greatest game ever played.

W.P. Kinsella's The Thrill of the Grass

The funniest baseball story ever written - after 30 innings, the game still ain't over!

A. Bartlett Giamatti's The Green Fields of the Mind

read by the author

Selected Shorts is an award-winning, one-hour program featuring readings of classic and new short fiction, recorded live at New York's Symphony Space. One of the most popular series on the airwaves, this unique show is hosted by Isaiah Sheffer and produced for radio by Symphony Space and WNYC Radio.

"...this story is gentle, hilarious and beautifully observed...Who needs satellite radio?" - From the Las Vegas Sun