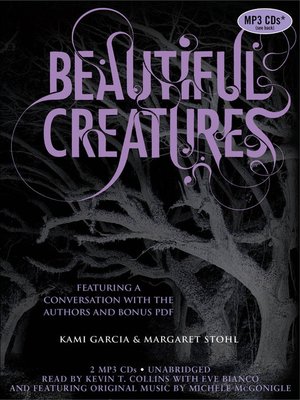 RomanceYoung Adult FictionYoung Adult Literature
The first book in a lush gothic fantasy series for younger readers of Charlaine Harris and fans of Cassandra Clare.
Lena Duchannes is unlike anyone the small Southern town of Gatlin has ever seen, and she's struggling to conceal her power, and a curse that has haunted her family for generations. But even within the overgrown gardens, murky swamps and crumbling graveyards of the forgotten South, a secret cannot stay hidden forever.
Ethan Wate, who has been counting the months until he can escape from Gatlin, is haunted by dreams of a beautiful girl he has never met. When Lena moves into the town's oldest and most infamous plantation, Ethan is inexplicably drawn to her and determined to uncover the connection between them.
In a town with no surprises, one secret could change everything.
RomanceYoung Adult FictionYoung Adult Literature

Kami Garcia and Margaret Stohl are longtime friends and coauthors of the #1 New York Times bestselling Beautiful Creatures series. The first book in the series, Beautiful Creatures, is now a major motion picture. In addition to writing together, t...

More about Kami Garcia
Beautiful Creatures
Copy and paste the code into your website.
New here? Learn how to read digital books for free