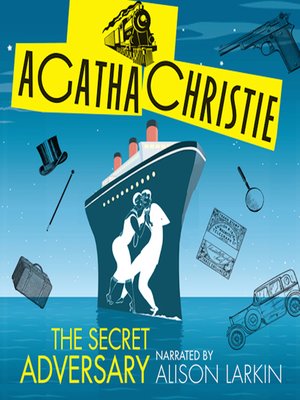 Award-winning narrator Alison Larkin's reading of Agatha Christie's second novel, The Secret Adversary, set in London in 1919, received glowing reviews. Publishers Weekly said "her performance captures that sense of carefree enthusiasm for life before the crash. Her reading is champagne bubbly and engaging throughout. A jaunty, jolly good listen."

"Alison Larkin's crisp, clear narration helps to conjure up the feeling of a bygone era when the class system was at the core of British society. The result is an easy listen of a classic tale of detection." –Audiofile Magazine

The Great War is over, and the roaring '20s are just on the horizon in London. Tommy and Tuppence are charming, broke and in desperate need of work. They decide to set up Young Adventurers Ltd.—"willing to do anything, go anywhere." They are soon caught up in a dastardly plot to overthrow the government.