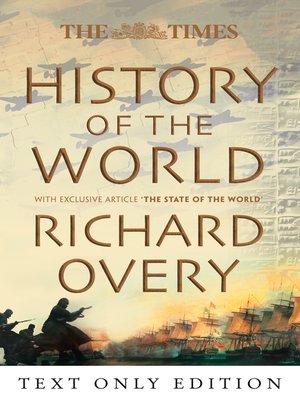 The Times History of the World

HistoryNonfiction
Discover the scope of the world’s history * With exclusive article by Richard Overy * Beginning with the story of early man, and culminating in the rise of global terrorism and environmental issues, the text is a breathtaking and unrivalled narrative which includes voyages of discovery, revolutions and wars, dynasties and empires. Richard Overy, with a team of historians, presents a factual chronological narrative as well as his own opinion-led piece in an extended article ‘The State of the World’ in which he gives his views on the primary factors which shape the world we live in. With fully-up-to-date content including material on Iraq, Afghanistan, terrorism and the environment, as well as the latest research into prehistory, this is the most complete and readable record of our world yet. From cavemen to the Cold War, from Alexander the Great to global warming, from warfare through the ages to the great voyages of exploration, The Times History of the World is the book that has all the answers, the detail and the authoritative text in one breathtaking single historical source.
HistoryNonfiction

Richard Overy is a leading authority in the field of modern history. He is Professor of Modern History at Exeter University, and is the general editor for the highly-acclaimed Times History of the World series of books.

More about Richard Overy
The Times History of the World
Copy and paste the code into your website.
New here? Learn how to read digital books for free