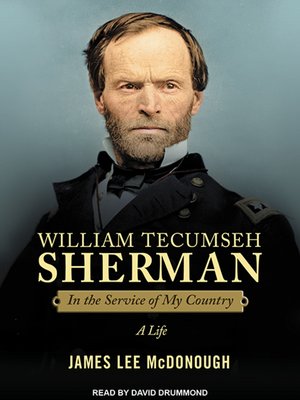 In the Service of My Country: A Life

Biography & AutobiographyHistoryMilitaryNonfiction
General Sherman's 1864 burning of Atlanta solidified his legacy as a ruthless leader. Yet Sherman proved far more complex than his legendary military tactics reveal. James Lee McDonough offers fresh insight into a man tormented by the fear that history would pass him by, who was plagued by personal debts, and who lived much of his life separated from his family. As a soldier, Sherman evolved from a spirited student at West Point into a general who steered the Civil War's most decisive campaigns, rendered here in graphic detail. Lamenting casualties, Sherman sought the war's swift end by devastating Southern resources in the Carolinas and on his famous March to the Sea. This meticulously researched biography explores Sherman's warm friendship with Ulysses S. Grant, his strained relationship with his wife, Ellen, and his unassuageable grief over the death of his young son, Willy. The result is a remarkable, comprehensive life of an American icon whose legacy resonates to this day.
Biography & AutobiographyHistoryMilitaryNonfiction

James Lee McDonough is a Civil War historian and professor emeritus at Auburn University. The author of several books, including Nashville: The Western Confederacy's Final Gamble and Shiloh: In Hell Before Night, he lives in Lewisburg, Tennessee.

More about James Lee McDonough
William Tecumseh Sherman
Copy and paste the code into your website.
New here? Learn how to read digital books for free