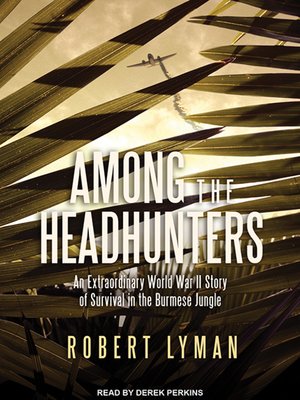 HistoryNonfiction
Flying the notorious "hump route" between India and China in 1943, a twin-engine plane suffered mechanical failure and crashed in a dense mountain jungle. Among the passengers and crew were celebrated CBS journalist Eric Sevareid, a Soviet double-agent posing as an OSS operative, and General Joseph "Vinegar Joe" Stilwell's personal political adviser. Against the odds, all but one of the twenty-one people aboard the aircraft survived-but they fell from the frying pan into the fire. They landed in wild countryside dominated by the Nagas, notorious headhunters who routinely practiced slavery and human sacrifice. Japanese soldiers lay close by, too, with their own brand of hatred for Americans. Among the Headhunters is the first account of this incredible story.
HistoryNonfiction

Robert Lyman is widely regarded as one of Britain's most talented military historians, with fourteen highly praised books and numerous appearances on television and in documentaries. He was commissioned from the Royal Military Academy at Sandhurst...

More about Robert Lyman
Among the Headhunters
Copy and paste the code into your website.
New here? Learn how to read digital books for free