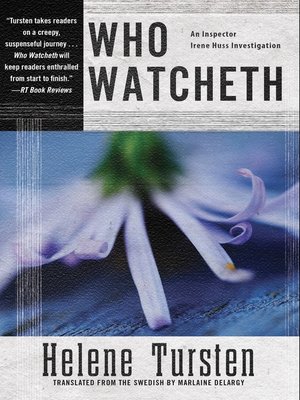 View more libraries...
“These days Scandinavian crime writers are thick on the ground. It’s nice to see that the women can be just as bloodthirsty as the men.” —The New York Times Book Review

He watches the women from the shadows. He has an understanding with them: As long as they follow his rules, they are safe. But when they sin, he sentences them to death.

A woman is found dead in a cemetery, strangled and covered in plastic. Just a few days before her death, the victim had received a flower, an unintelligible note, and a photograph of herself. Detective Inspector Irene Huss and her colleagues on the Violent Crimes Unit in Göteborg, Sweden, have neither clue nor motive to pursue, and when similar murders follow, their search for the killer becomes increasingly desperate. Meanwhile, strange things have been going on at home for Irene: first the rose bush in her garden is mangled, then she receives a threatening package with no return address. Is Irene being paranoid, or is she next on the killer’s list?