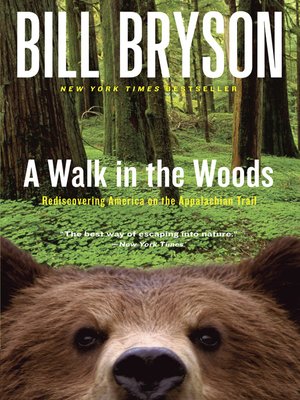 A Walk in the Woods

Rediscovering America on the Appalachian Trail

EssaysTravelNonfictionHumor (Nonfiction)
A classic from the New York Times bestselling author of A Short History of Nearly Everything and The Body.

Back in America after twenty years in Britain, Bill Bryson decided to reacquaint himself with his native country by walking the 2,100-mile Appalachian Trail, which stretches from Georgia to Maine. The AT offers an astonishing landscape of silent forests and sparkling lakes—and to a writer with the comic genius of Bill Bryson, it also provides endless opportunities to witness the majestic silliness of his fellow human beings.
For a start there's the gloriously out-of-shape Stephen Katz, a buddy from Iowa along for the walk. Despite Katz's overwhelming desire to find cozy restaurants, he and Bryson eventually settle into their stride, and while on the trail they meet a bizarre assortment of hilarious characters. But A Walk in the Woods is more than just a laugh-out-loud hike. Bryson's acute eye is a wise witness to this beautiful but fragile trail, and as he tells its fascinating history, he makes a moving plea for the conservation of America's last great wilderness. An adventure, a comedy, and a celebration, A Walk in the Woods has become a modern classic of travel literature.
EssaysTravelNonfictionHumor (Nonfiction)

Bill Bryson's bestselling books include A Walk in the Woods, The Life and Times of the Thunderbolt Kid, and A Short History of Nearly Everything (which won the Aventis Prize in Britain and the Descartes Prize, the European Union's highest literary...

More about Bill Bryson
A Walk in the Woods
Copy and paste the code into your website.
New here? Learn how to read digital books for free