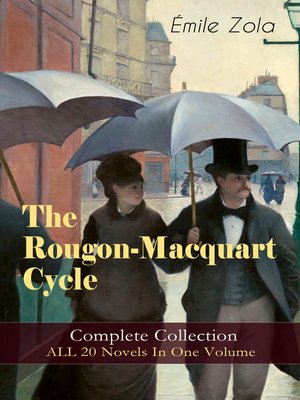 Complete Collection--ALL 20 Novels In One Volume: The Fortune of the Rougons, The Kill, The Ladies' Paradise, The Joy of Life, The Stomach of Paris, The Sin of Father Mouret, The Masterpiece, Germinal, Nana, The Downfall and more

FictionLiteratureRomanceShort Stories
This carefully crafted ebook: "The Rougon-Macquart Cycle: Complete Collection - ALL 20 Novels In One Volume" is formatted for your eReader with a functional and detailed table of contents. Les Rougon-Macquart is the collective title given to a cycle of twenty novels by French writer Émile Zola. Subtitled "Natural and social history of a family under the Second Empire", it follows the life of one family during the Second French Empire (1852–1870). In this tremendous work Zola first and foremost examines the impact of social environment on men and women, by varying the social, economic, political and professional milieu in which each novel takes place. It provides us with a close look at everyday life, gives us a deep insight into important social changes and it shows us the true people's history of the Second Empire. Table of Contents: The Fortune of the Rougons (La Fortune des Rougon) The Kill (La Curée) The Belly of Paris (Le Ventre de Paris) The Conquest of Plassans (La Conquête de Plassans) The Sin of Father Mouret (La Faute de l'Abbé Mouret) His Excellency Eugène Rougon (Son Excellence Eugène Rougon) The Drinking Den (L'Assommoir) One Page of Love (Une Page d'amour) Nana Piping Hot (Pot-Bouille) The Ladies' Paradise (Au Bonheur des Dames) The Joy of Life (La Joie de vivre) Germinal The Masterpiece (L'Œuvre) The Earth (La Terre) The Dream (Le Rêve) The Beast in Man (La Bête humaine) Money (L'Argent) The Downfall (La Débâcle) Doctor Pascal (Le Docteur Pascal) Émile Zola (1840-1902), French novelist, critic, and political activist who was the most prominent French novelist of the late 19th century. He was noted for his theories of naturalism, which underlie his monumental 20-novel series Les Rougon-Macquart, and for his intervention in the Dreyfus Affair through his famous open letter, "J'accuse."
FictionLiteratureRomanceShort Stories

The Rougon-Macquart Cycle
Copy and paste the code into your website.
New here? Learn how to read digital books for free