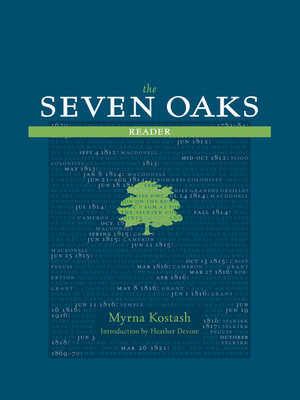 Finalist for the Wildrid Eggleston Award for Nonfiction at the 2017 Alberta Literary Awards!

The long rivalry between the Hudson's Bay Company and the North West Company for control of the fur trade in Canada's northwest came to an explosive climax on June 19th, 1816, at the so-called Battle of Seven Oaks. Armed buffalo hunters – Indigenous allies of the Nor-Westers – confronted armed colonists of the HBC's Selkirk settlement near the forks of the Assiniboine and Red Rivers in today's Winnipeg. This "battle" would prove to be a formative event for Métis self-determination as well as laying down a legacy for settlers to come.

The Seven Oaks Reader offers a comprehensive retelling of one of Canada's most interesting historical periods, the Fur Trade Wars. As in the companion volume, The Frog Lake Reader, Kostash incorporates period accounts and journals, histories, memoirs, songs and fictional retellings, from a wide range of sources, offering readers an engaging and exciting way back into still-controversial historical events.