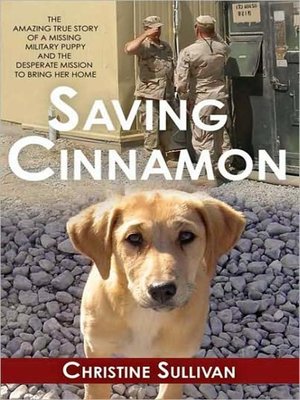 Set against the backdrop of the war in Afghanistan, Saving Cinnamon chronicles the love story of Navy Reservist Mark Feffer and a stray puppy he bonded with while stationed outside of Kandahar. When Mark is about to return stateside, he decides to adopt Cinnamon and sets up her transport back to the United States. But the unthinkable happens: Cinnamon is abandoned by the dog handler who was supposed to bring her home and disappears without a trace. Mark and his family start a desperate search for the puppy that lasts forty-four days and ends dramatically when Mark and Cinnamon are finally reunited. This is a touching memoir told by Mark's sister, who initiated the rescue efforts.

Christine Sullivan's true passion in life is caring for animals in need. She is cofounder of New Hope for Animals and continues to work with Operation Baghdad Pups.

More about Christine Sullivan
Saving Cinnamon
Copy and paste the code into your website.
New here? Learn how to read digital books for free