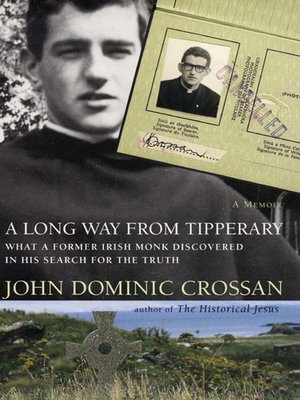 A Long Way from Tipperary

What a Former Monk Discovered in His Search for the Truth

I have spent thirty years reconstructing the historical Jesus. I have done so self-consciously and self-critically and have tried to do the same on reconstructing myself. But what justifies this memoir is how my own personal experience, from Ireland to America, from priest to professor, from monastery to university, and ... from celibacy to marriage, may have influenced that reconstruction. Where has it helped me see what others have not, and where has it made invisible to me what others find obvious?
-from A Long Way from Tipperary

From his upbringing in Ireland to front-page coverage in the New York Times and mention in cover stories in Time, Newsweek, and U.S. News & World Report, John Dominic Crossan-who has courageously pioneered the contemporary quest for the historical Jesus-has dared to go his own way. In this candid and engaging memoir, the world's foremost Jesus scholar reveals what he has discovered over a lifetime of open-eyed, fearless exploration of God, Jesus, Christianity, and himself. Crossan shares his provocative thinking on such issues as how one can be a Christian without going to church; whether God is vengeful, or just, or both; and why Jesus is more like Gandhi or Martin Luther King Jr. than like the Pope or Jerry Falwell.

Raised in the traditional Irish Catholic Church, Crossan inherited a faith that was "accepted fully and internalized completely but undiscussed, uninvestigated, and uncriticized." A dauntless spirit whose imagination was ignited not by piety but by the lure and challenge of adventure, he became a monk to travel and explore the world, unaware that his most thrilling quests would be scholarly and spiritual. "God had going the best adventure around," Crossan confesses.

Because he could never subject his theological convictions and historical findings to the restrictions of the Church, Crossan chose to leave the monastery and priesthood. Speaking of this time in his life, Crossan writes, "Not even a vow of obedience could make me sing a song I did not hear." But he never abandoned the Roman Catholic community or tradition and never lost his faith. He has devoted his life and career to a reexamination of what he calls "necessary open-heart surgery on Christianity itself."

More about John Dominic Crossan
A Long Way from Tipperary
Copy and paste the code into your website.
New here? Learn how to read digital books for free