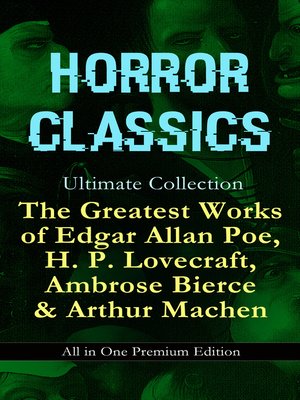 The Greatest Works of Edgar Allan Poe, H. P. Lovecraft, Ambrose Bierce & Arthur Machen--All in One Premium Edition: Occult & Supernatural Tales: The Masque of the Red Death, The Call of Cthulhu, At The Mountains Of Madness, The Devil's Dictionary, Th

FantasyFictionHorrorShort Stories
This carefully crafted ebook: "HORROR CLASSICS Ultimate Collection" is formatted for your eReader with a functional and detailed table of contents: H. P. Lovecraft: The Call of Cthulhu The Shadow Over Innsmouth Dagon The Dunwich Horror The Picture in the House The Outsider The Silver Key In the Vault The Whisperer in Darkness The Thing on the Doorstep The Shadow out of Time The Colour out of Space The Music of Erich Zann The Haunter of the Dark The Rats in the Walls Pickman's Model From Beyond Herbert West-Reanimator At The Mountains Of Madness Edgar Allan Poe: The Fall of the House of Usher The Cask of Amontillado The Pit and the Pendulum The Tell-Tale Heart The Masque of the Red Death The Black Cat The Murders in the Rue Morgue Ambrose Bierce: The Damned Thing An Occurrence at Owl Creek Bridge The Devil's Dictionary Chickamauga Arthur Machen: The Three Impostors The Hill of Dreams The Terror The Secret Glory The White People The Great God Pan The Inmost Light The Shining Pyramid The Red Hand The Great Return ... H. P. Lovecraft (1890-1937) was an American author who achieved posthumous fame through his influential works of horror fiction. He is now regarded as one of the most significant 20th-century authors in his genre. Some of Lovecraft's work was inspired by his own nightmares. His interest started from his childhood days when his grandfather would tell him Gothic horror stories. Edgar Allan Poe (1809-1849) was an American writer. He is best known for his poetry and short stories, particularly his tales of mystery and the macabre. Ambrose Bierce (1842-1914) was an American journalist and writer. He employed a distinctive style of writing, especially in his stories. His style often embraces an abrupt beginning, dark imagery, vague references to time, limited descriptions, impossible events, and the theme of war. Arthur Machen (1863-1947) was a Welsh author and mystic. He is best known for his influential supernatural, fantasy, and horror fiction
FantasyFictionHorrorShort Stories

Horror Classics Ultimate Collection
Copy and paste the code into your website.
New here? Learn how to read digital books for free