ebook ∣ How LGBT Athletes Are Claiming Their Rightful Place in Sports 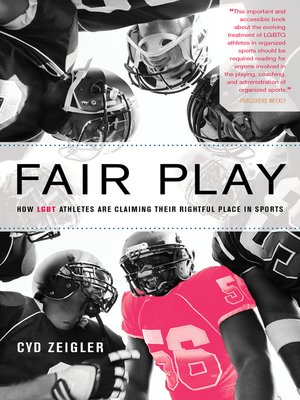 "This important and accessible book about the evolving treatment of LGBTQ athletes in organized sports should be required reading for anyone involved in the playing, coaching, and administration of organized sports. Zeigler, an expert in LGBTQ athletics and cofounder of the online magazine Outsports, revisits key moments that have shaped sports participation for openly LGBTQ athletes....The author debunks the myth that having a nonstraight athlete on a team's roster is a 'distraction' and shares positive stories of younger athletes at high school and college levels who have come out to coaches, teammates, and family members. Zeigler argues that the dominant emotion holding back LGBTQ athletes is fear, reminding them and everyone else that courage is contagious."
—Publishers Weekly
"Outsports.com founder Zeigler gives an account of the great strides LGBTQ athletes have made in the sports world over the last 15 years...Lively and provocative, the book not only offers a much-needed perspective on what until recently has been one of the last bastions of heterosexism. It is also significant for its conscious consideration of how current developments will impact LGBTQ athletes of tomorrow. An informative, necessary work."
—Kirkus Reviews
"Zeigler is the cofounder of the online magazine Outsports, and he is a vocal and respected advocate for the LGBT sports community. Here he pens a series of essays about athletes who have come out, noting the misguided homophobia in the locker-room culture of sports, and the important role that straight athletes can play in the gay movement...Well researched, timely, and provocative, Zeigler's book provides readers with candid personal accounts of the struggles and triumphs of LGBT athletes across a wide spectrum of the sports world."
—Booklist
"Zeigler candidly examines the issues involved in gay athletes' coming-out processes, and the support (or, often, lack thereof) they receive from teammates, coaches, and their sports. front offices...Zeigler gives due credit where it's deserved, while sharply analyzing the deep undercurrents of squeamishness and hesitation that still stymie team sports' full acceptance of their LGBT participants...Cyd Zeigler is here to remind us that there's still much work to be done."
—ALA's Gay Lesbian Bisexual Transgender Round Table
"Fair Play, published in conjunction with Akashic Books, tells the story of how sports are transforming for LGBTQ athletes, and specifically focuses on the time period following the turn of the 21st century. Zeigler's book covers treatment of LGBTQ athletes, touching on bullying and hazing that has surrounded, and continues to surround, LGBTQ athletes, specifically in high school and college, while weaving in stories of LGBT athletes and allies such as Michael Irvin, Fallon Fox, and Michael Sam, among others."
—GLAAD
"Fair Play presents LGBT history and shows how far the movement has come. It's also an important scrapbook of past and present-day gay athletes who have bravely tested America's social climate and come out, even when their careers were at risk."
—Bay Area Reporter
The latest from Akashic's Edge of Sports imprint.
When Cyd Zeigler started writing about LGBT sports issues in 1999, no one wanted to talk about them. Today, this is a central conversation in American society that reverberates throughout the sports world and beyond.
In Fair Play, Zeigler tells the story of how sports have transformed for LGBT athletes, diving into key moments and issues that have shaped sports for LGBT people today. He...