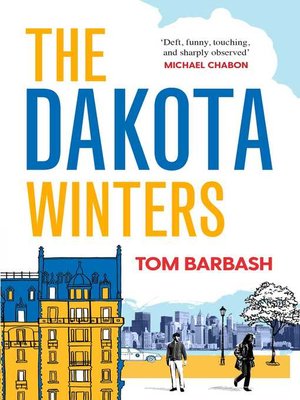 View more libraries...
By turns hilarious and poignant, The Dakota Winters is a family drama, a page-turning social novel, and a tale of a critical moment in the history of New York City in the year leading up to John Lennon's assassination.
'Conjures a gritty, populous, affectionate portrait of 1979 New York City' Jennifer Egan, author of Manhattan Beach
It's the fall of 1979 when 23-year-old Anton Winter, back from the Peace Corps and on the mend from a nasty bout of malaria, returns to his childhood home in the Dakota Building in New York City. Anton's father, the famous late-night host Buddy Winter is there to greet him, himself recovering from a breakdown. Before long Anton is swept up in an effort to reignite Buddy's stalled career, a mission that takes him from the gritty streets of New York, to the slopes of the Lake Placid Olympics, to the Hollywood Hills, to the blue waters of the Bermuda Triangle, and brings him into close quarters with the likes of Johnny Carson, Ted and Joan Kennedy, and a seagoing John Lennon.
But the more Anton finds himself enmeshed in his father's professional and spiritual reinvention, the more he questions his own path, and fissures in the Winter family begin to threaten their close bond.
"The first great novel of 2019"? GQ
'Deft, funny, touching, and sharply observed, a marvel of tone, and a skillful evocation of a dark passage in the history of New York City, when all the fearful ironies of the world we live in now first came stalking into view' Michael Chabon, author of Moonglow
'It spins and dazzles. And holds on tenaciously to the human heart.' Providence Journal
'In Tom Barbash's The Dakota Winters, you can practically hear Lennon's signature cackle, feel the tickle of his ponytailed hair, smell the salt air.' The Washington Post
'This is a crazily charming novel ... I wanted to begin a new life in these pages, with these characters. I wanted to trade worlds with them. This is a wise and seductive story that feels truer than true, as only the very finest fiction does' Walter Kirn, author of Up in the Air
"Seamlessly mingling historical figures with invented ones, Tom Barbash conjures a gritty, populous, affectionate portrait of 1979 New York City: the site of his subtly captivating paean to filial love." (Jennifer Egan, author of Manhattan Beach )?
"Excellent.... At its heart, this is a story about family bonds and a pivotal time in New York." (Rolling Stone)