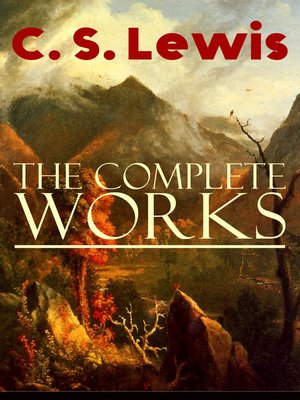 FantasyFictionShort Stories
This carefully crafted ebook: "The Complete Works of C. S. Lewis" is formatted for your eReader with a functional and detailed table of contents: Novels: The Chronicles of Narnia: The Lion, the Witch and the Wardrobe Prince Caspian The Voyage of the Dawn Treader The Silver Chair The Horse and His Boy The Magician's Nephew The Last Battle Space Trilogy: Out of the Silent Planet Perelandra That Hideous Strength The Screwtape Letters The Pilgrim's Regress The Great Divorce Till We Have Faces Short Stories: Screwtape Proposes a Toast Ministering Angels Religious Studies: The Allegory of Love The Problem of Pain A Preface to Paradise Lost The Abolition of Man Miracles Mere Christianity Reflections on the Psalms The Four Loves An Experiment in Criticism A Grief Observed Letters to Malcolm: Chiefly on Prayer Poetry: Spirits in Bondage: A Cycle of Lyrics Autobiography: Surprised by Joy: The Shape of My Early Life Speeches: Transposition The Weight of Glory Membership Learning in War-Time The Inner Ring De Descriptione Temporum The Literary Impact of the Authorised Version Hamlet: The Prince or The Poem? Kipling's World Sir Walter Scott Lilies that Fester Psycho-analysis and Literary Criticism The Inner Ring Is Theology Poetry? Transposition On Obstinacy in Belief The Weight of Glory Clive Staples Lewis (1898-1963) was a British novelist, poet, academic, medievalist, literary critic, essayist, lay theologian, broadcaster, lecturer, and Christian apologist. He is best known for his fictional work, especially The Chronicles of Narnia, The Screwtape Letters and The Space Trilogy, and for his non-fiction Christian apologetics, such as Mere Christianity, Miracles, and The Problem of Pain.
FantasyFictionShort Stories

The Complete Works of C. S. Lewis
Copy and paste the code into your website.
New here? Learn how to read digital books for free