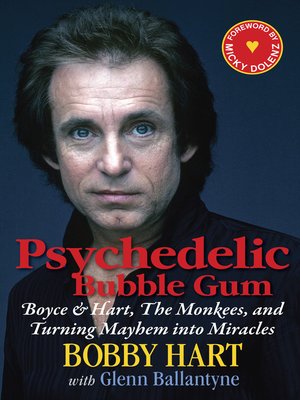 From the man who wrote the music that outsold the Beatles and the Rolling Stones in 1967-1968, . Immerse yourself in Grammy, Golden Globe, and Academy Award nominated songwriter Bobby Hart's world as he shares an exclusive glimpse into his life. Psychedelic Bubble Gum is the story behind his success, the rise of Boyce and Hart as musical goliaths, and their role in launching the Monkees to stardom. With unbending sincerity, Hart details a life of extravagance, betrayal, loss, disillusionment, and an unstoppable personal struggle to find balance, peace, and love. Psychedelic Bubble Gum is a rollercoaster ride through the 1960s and 70s America's whirlwind era of free speech, mysticism, and psychedelic pop culture packed with intimate behind-the-scenes encounters with pop star royalty. Psychedelic Bubble Gum is tempered by humor, honesty, and a singular understanding of the industry.