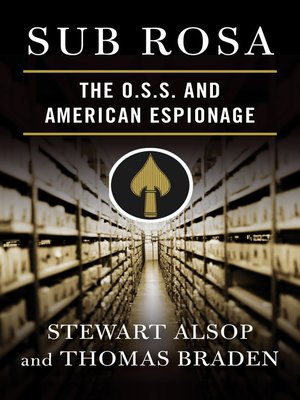 View more libraries...
A thrilling history of the Office of Strategic Services, America's precursor to the CIA, and its secret operations behind enemy lines during World War II.

Born in the fires of the Second World War, the Office of Strategic Services, or OSS, was the brainchild of legendary US Maj. Gen. William "Wild Bill" Donovan, designed to provide covert aid to resistance fighters in European nations occupied by Germany's Nazi aggressors. Paratroopers Stewart Alsop and Thomas Braden—both of whom would become important political columnists in postwar years—became part of Wild Bill's able collection of soldiers, spies, and covert operatives. Sub Rosa is an enthralling insider's history of the remarkable intelligence operation that gave birth to the CIA.

In Sub Rosa, Alsop and Braden take readers on a breathtaking journey through the birth and development of the top secret wartime espionage organization and detail many of the extraordinary OSS missions in France, Germany, Dakar and Casablanca in North Africa, and in the jungles of Burma that helped to hasten the end of the Japanese Empire and the fall of Adolf Hitler's powerful Reich.

As exciting as any international thriller written by Eric Ambler or Graham Greene, Alsop and Braden's Sub Rosa is an indispensable addition to the literary history of American espionage and intelligence.