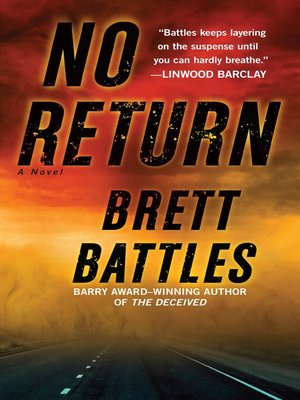 FictionMysterySuspenseThriller
An F-18 Navy fighter careens out of the blue sky above the Mojave desert. A TV cameraman who grew up in a small town just miles away can see what is going to happen next. Frantically, Wes Stewart races to the downed jet and tries to save the pilot's life. When the plane explodes, Wes escapes without harm—and plunges into a murderous conspiracy.
It's been fifteen years since Wes has been back to the desolate land of his childhood. Now he finds himself up against the U.S. military, the local police, and someone who is tracking his every move. In the moments he spent with the dying pilot, Wes discovered something that could get him killed. But while he tries to untangle a web of lies and secrets surrounding the crash, another danger is stalking him. And this one he will never see coming.
From the Paperback edition.
FictionMysterySuspenseThriller

Brett Battles lives in Los Angeles and is the author of two acclaimed novels in the Jonathan Quinn series: The Cleaner, which was nominated for a Barry Award for Best Thriller and a Shamus Award for Best First Novel, and The Deceived.

More about Brett Battles
No Return
Copy and paste the code into your website.
New here? Learn how to read digital books for free