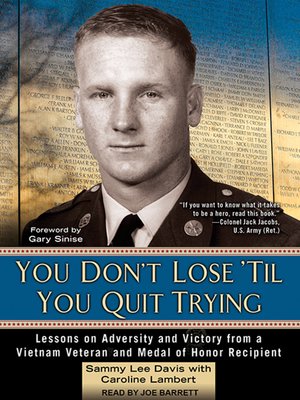 You Don't Lose 'Til You Quit Trying

Biography & AutobiographyMilitaryNonfiction
On November 18th, 1967, Private First Class Davis's artillery unit was hit by a massive enemy offensive. At twenty-one years old, he resolved to face the onslaught and prepared to die. Soon he would have a perforated kidney, crushed ribs, a broken vertebra, his flesh ripped by beehive darts, a bullet in his thigh, and burns all over his body. Ignoring his injuries, he manned a two-ton Howitzer by himself, crossed a canal under heavy fire to rescue three wounded American soldiers, and kept fighting until the enemy retreated. His heroism that day earned him a Congressional Medal of Honor-the ceremony footage of which ended up being used in the movie Forrest Gump. You Don't Lose 'Til You Quit Trying chronicles how Davis's childhood in the American Heartland prepared him for the worst night of his life, and how that night set off a lifetime battling against debilitating injuries. But he also battled for his fellow veterans, speaking on their behalf for forty years to help heal the wounds and memorialize the brotherhood that war could forge. Here, listeners will learn of Sammy Lee Davis's extraordinary life-the courage, the pain, and the triumph.
Biography & AutobiographyMilitaryNonfiction

Caroline Lambert is a freelance writer and award-winning former journalist. While a staff writer and then Johannesburg bureau chief for the Economist, she reported from Afghanistan, Sierra Leone, and Zimbabwe. She is coauthor of Oil to Cash: Fight...

Sammy Lee Davis received the Medal of Honor in 1968 for his actions during the Vietnamese attack on Support Base Cudgel. He also received the Silver Star and the Purple Heart, was named one of Newsweek's 100 Unsung Heroes, and received the Joe Fos...

More about Sammy Lee Davis
You Don't Lose 'Til You Quit Trying
Copy and paste the code into your website.
New here? Learn how to read digital books for free