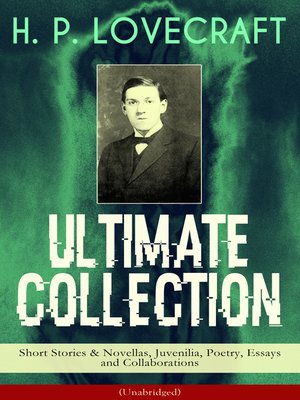 Short Stories & Novellas, Juvenilia, Poetry, Essays and Collaborations (Unabridged): Dagon, Beyond the Wall of Sleep, The Cats of Ulthar, The Alchemist, The Doom that Came to Sarnath, The Nameless City, The Picture in the House, The Tomb, Ex Oblivion

FantasyFictionRomanceShort Stories
This carefully crafted ebook: "H. P. LOVECRAFT Ultimate Collection: Short Stories & Novellas, Juvenilia, Poetry, Essays and Collaborations (Unabridged)" is formatted for your eReader with a functional and detailed table of contents. Howard Phillips Lovecraft (1890-1937) was an American author who achieved posthumous fame through his influential works of horror fiction. He is now regarded as one of the most significant 20th-century authors in his genre. Some of Lovecraft's work was inspired by his own nightmares. His interest started from his childhood days when his grandfather would tell him Gothic horror stories. Table of Contents: Short Stories and Novellas: The Tomb Dagon A Reminiscence of Dr. Samuel Johnson Polaris Beyond the Wall of Sleep The White Ship The Doom that Came to Sarnath The Statement of Randolph Carter The Street The Terrible Old Man The Cats of Ulthar The Tree Celephaïs Nyarlathotep The Picture in the House Facts concerning the Late Arthur Jermyn and His Family The Nameless City Ex Oblivione The Music of Erich Zann Herbert West-Reanimator Juvenilia: The Alchemist The Beast in the Cave Poetry: Poemata Minora, Volume II On Receiving a Picture of Swans Unda; or, The Bride of the Sea An American to Mother England Lines on Gen. Robert Edward Lee The Rose of England The Poe-et's Nightmare Fact and Fancy Pacifist War Song - 1917 A Garden The Peace Advocate Ode for July Fourth, 1917 Nemesis Astrophobos Sunset Laeta; a Lament Psychopompos: A Tale in Rhyme The Conscript Despair Revelation The House The City To Edward John Moreton Drax Plunkett, Eighteenth Baron Dunsany The Nightmare Lake On Reading Lord Dunsany's Book of Wonder Christmas Sir Thomas Tryout Essays: At the Root The Allowable Rhyme The Despised Pastoral Metrical Regularity Literary Composition Collaborations: Poetry and the Gods The Crawling Chaos Four O'Clock
FantasyFictionRomanceShort Stories

H. P. Lovecraft Ultimate Collection
Copy and paste the code into your website.
New here? Learn how to read digital books for free