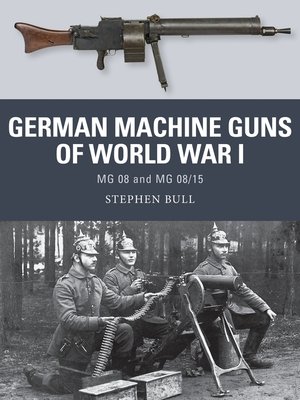 World War I's defining weapon for many, Germany's MG 08 machine gun won a formidable reputation on battlefields from Tannenberg to the Somme. Although it was a lethally effective weapon when used from static positions, the MG 08 was far too heavy to perform a mobile role on the battlefield. As the British and French began to deploy lighter machine guns alongside their heavier weapons, the Germans fielded the Danish Madsen and British Lewis as stopgaps, but chose to adapt the MG 08 into a compromise weapon – the MG 08/15 – which would play a central role in the revolutionary developments in infantry tactics that characterized the last months of the conflict. In the 1940s, the two weapons were still in service with German forces fighting in a new world war. Drawing upon eyewitness battlefield reports, this absorbing study assesses the technical performance and combat record of these redoubtable and influential German machine guns, and their strengths and limitations in a variety of battlefield roles.