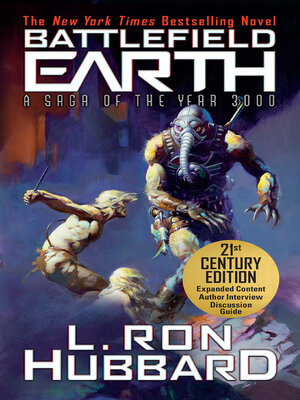 View more libraries...
In the year A.D. 3000, Earth is a dystopian wasteland, plundered of its natural resources by alien conquerors known as Psychlos. Fewer than thirty-five thousand humans survive in a handful of communities scattered across the face of a post-apocalyptic Earth.
From the ashes of humanity rises a young hero, Jonnie Goodboy Tyler. Setting off on an initial quest to discover a hidden evil, Jonnie unlocks the mystery of humanity's demise and unearths a crucial weakness in their oppressors. Spreading the seeds of revolt, Jonnie and a small band of survivors pit their quest for freedom in an all-out rebellion that erupts across the continents of Earth and the cosmic sprawl of the Psychlo empire.
For the fate of the Galaxy lies on the Battlefield of Earth.
"Over 1,000 pages of thrills, spills, vicious aliens and noble humans. I found Battlefield Earth un-put-downable." —Neil Gaiman
"Battlefield Earth is a terrific story! The carefully underplayed comedy I found it delicious. A masterpiece." —Robert A. Heinlein
"Pulse-pounding mile-a-minute sci-fi action adventure that does not stop. It is a masterpiece of popular adventure science fiction." —Brandon Sanderson
"Space opera that hits the right notes. It's provocative, exhilarating and genuinely enjoyable." —SCIFI.COM
Awards and Accolades: Top 100 science fiction books
Top three of the best 100 English language novels of the 20th century by the Random House Modern Library Readers Poll
US Golden Scroll and Saturn Awards
Tetradramma d'Oro Award
Gutenberg Award
Read the novel that changed the shape of science fiction
* Over 4,000,000 copies sold * Translated in 25 languages * 21st Century edition with expanded content: author's never-before-published handwritten notes & an exclusive author interview
An engaging read for STEM learning
The imaginative diversity of the novel's characters and alien races, its military artifacts and striking technologies and mathematics make it the perfect motivation for STEM learning. "Want to get your kid excited about STEM? Battlefield Earth will give you the talking points, in fact, they'll already be talking about it." —S.G. Educator
Accelerated Reader level 5.8, students earn 62 points
Lexile 780
Discussion guide available for book clubs and educators