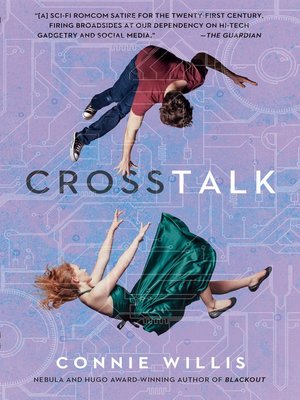 View more libraries...
Science fiction icon Connie Willis brilliantly mixes a speculative plot, the wit of Nora Ephron, and the comedic flair of P. G. Wodehouse in Crosstalk—a genre-bending novel that pushes social media, smartphone technology, and twenty-four-hour availability to hilarious and chilling extremes as one young woman abruptly finds herself with way more connectivity than she ever desired.
NAMED ONE OF THE BEST BOOKS OF THE YEAR BY NPR
In the not-too-distant future, a simple outpatient procedure to increase empathy between romantic partners has become all the rage. And Briddey Flannigan is delighted when her boyfriend, Trent, suggests undergoing the operation prior to a marriage proposal—to enjoy better emotional connection and a perfect relationship with complete communication and understanding. But things don’t quite work out as planned, and Briddey finds herself connected to someone else entirely—in a way far beyond what she signed up for.
It is almost more than she can handle—especially when the stress of managing her all-too-eager-to-communicate-at-all-times family is already burdening her brain. But that’s only the beginning. As things go from bad to worse, she begins to see the dark side of too much information, and to realize that love—and communication—are far more complicated than she ever imagined.
Praise for Crosstalk
“A rollicking send-up of obsessive cell phone usage in too-near-future America . . . [Connie] Willis’s canny incorporation of scientific lore, and a riotous cast . . . make for an engaging girl-finally-finds-right-boy story that’s unveiled with tact and humor. Willis juxtaposes glimpses of claimed historical telepaths with important reflections about the ubiquity of cell phones and the menace that unscrupulous developers of technology pose to privacy, morality, and emotional stability.”—Publishers Weekly
“An exhilarating and laugh-inducing read . . . one of those rare books that will keep you up all night long because you can’t bear to put it down.”—Portland Book Review
“A fun technological fairy tale.”—BookPage
“One of the funniest SF novels in years.”—Locus