ebook ∣ My Life with Bowie 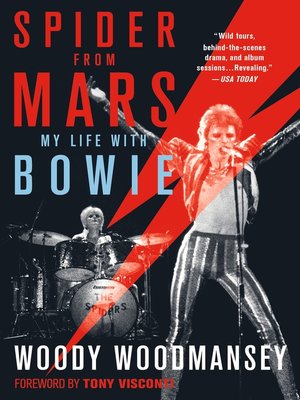 In January 2016, the unexpected death of David Bowie rocked the globe. For millions of people, he was an icon celebrated for his music, his film and theatrical roles, and his trendsetting influence on fashion and gender norms. But no one from her inner circle has told the story of how David Jones—a young folksinger, dancer, and aspiring mime—became one of the most influential artists of our time.
Drummer Woody Woodmansey is the last surviving member of Bowie's band The Spiders from Mars which helped launch his Ziggy Stardust persona and made David Bowie a sensation.
In this first memoir to follow Bowie's passing, Spider from Mars reveals what it was like to be at the white-hot center of a star's self-creation. With never-before-told stories and never-before-seen photographs, Woodmansey offers details of the album sessions for The Man Who Sold the World, Hunky Dory, The Rise and Fall of Ziggy Stardust and the Spiders from Mars, and Aladdin Sane: the four albums that made Bowie a cult figure. And, as fame beckoned by eventually consumed Bowie, Woodmansey recalls the wild tours, eccentric characters, and rock 'n' roll excess that eventually drove the band apart.
A vivid and unique evocation of a transformative musical era and the enigmatic, visionary musician at the center of it, with a foreword by legendary music producer Tony Visconti and an afterword from Def Leppard's Joe Elliot, Spider from Mars is for everyone who values David Bowie, by one of the people who knew him best.