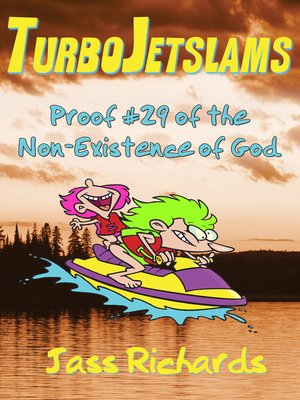 Proof #29 of the Non-Existence of God

FictionHumor (Fiction)
You ever have a neighbour whose behaviour is so mind-bogglingly inconsiderate and so suicide-inducingly annoying that you just want to ask him, in a polite Canadian way, to please stop? TurboJetslams isn't like that.Jass Richards' new novel, TurboJetslams: Proof #29 of the Non-Existence of God, tells the tale of one person's pathetic and hilarious attempts to single-handedly stop the destruction of a little piece of beautiful Canadian wilderness by the increasing numbers of idiots who couldn't care less."Extraordinarily well written with wit, wisdom, and laugh-out-loud ironic recognition, "TurboJetslams: Proof #29 of the Non-Existence of God" is a highly entertaining and a riveting read that will linger on in the mind and memory long after the little book itself has been finished and set back upon the shelf (or shoved into the hands of friends with an insistence that they drop everything else and read it!). Highly recommended for community library collections." Midwest Book Review
FictionHumor (Fiction)

More about Jass Richards
TurboJetslams
Copy and paste the code into your website.
New here? Learn how to read digital books for free