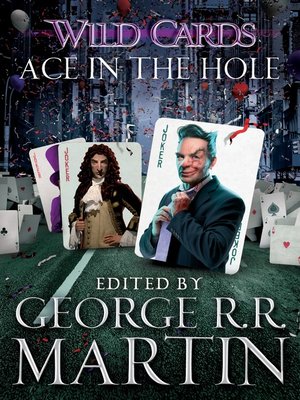 Ace in the Hole

Since a strange alien virus created the superhuman beings known as Aces and Jokers four decades ago, they have struggled for respect and recognition. Now they are key players in a presidential convention torn by hatred and dissent. Assassins stalk the halls of the convention and one of the candidates plans to use his secret Wild Card power for evil.
Travel on a journey of intrigue and adventure in this collaborative novel edited by #1 New York Timesbestselling author George R. R. Martin and written by five of science fiction's most imaginative talents: Stephen Leigh, Victor Milan, Walton Simons, Melinda M. Snodgrass, and Walter Jon Williams.
Read by Clancy Brown, Will Estes, Stephen McHattie, and Raphael Sbarge, with PJ Ochlan and Emily Rankin

"Delicious. Everything I hoped for. The character interactions and plot twists have exactly the complexity, surprise, and unsentimental realism I'd expect out of a George R. R. Martin project." —Austin Grossman, author of Soon I Will be Invincible on Inside Straight
FantasyFiction

George R.R. Martin sold his first story in 1971 and has been writing professionally since then. He spent ten years in Hollywood as a writer-producer, working on The Twilight Zone, Beauty and the Beast, and various feature films and television pilo...

Ace in the Hole
Copy and paste the code into your website.
New here? Learn how to read digital books for free