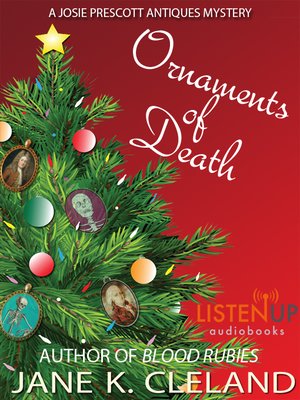 Christmas lights twinkle throughout the cozy coastal town of Rocky Point, New Hampshire, and Prescott's Antiques auction venue has been transformed into a winter wonderland for Josie Prescott's annual holiday party. Josie is especially excited this year Ian Bennington, a recently discovered distant relative, will be joining the fun. Both Ian and Josie are, it seems, descended from Arabella Churchill, a 17th century royal mistress. The party is a success and Ian is a hit. It gives Josie an unexpected thrill to have family and unexpected dread when he vanishes. Ian doesn't keep his dinner date with Josie's good friend, Lavinia, or his lunch date with her. Surely, he would have done so if he could. Ian has given his daughter two priceless 17th century watercolor miniature portraits, one of Arabella and one of her lover, King James II, and they've gone missing, too. Knowing that after her nasty divorce, Lavinia is facing financial ruin, Josie can't help wondering if her friend is behind the theft—and Ian's disappearance. Determined to find Ian, Josie uses her knowledge of antiques to track the miniatures. In doing so, she learns the true meaning of Christmas and the true meaning of family. Jane Cleland's Ornaments of Death is another masterful addition to the Josie Prescott series.