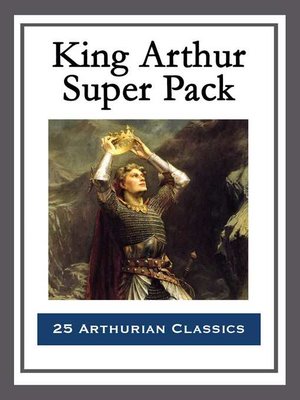 FantasyFictionShort StoriesThriller
The King Arthur Super Pack is the most complete collection of Arthurian literature ever assembled. There are more than two thousand pages of amazing literature here. There are more than a dozen major works included in this collection, as well as a number of works of interest to Arthurian fans. Journey back in time to the days of King Arthur and the Knights of the Round Table, when magic and chivalry ruled the land. Included in this omnibus edition are: 'Le Morte D'Arthur' by Sir Thomas Malory; 'Idylls of the King' by Lord Alfred Tennyson; 'A Connecticut Yankee In King Arthur's Court' by Mark Twain; 'Erec et Enide' by Chrétien de Troyes; 'The Legends of King Arthur and His Knights' by Sir James Knowles; 'Stories of King Arthur's Knights: Told to the Children' by Mary MacGregor; 'Stories of King Arthur and His Knights' by U. Waldo Cutler; 'King Arthur's Knights: The Tales Re-Told for Boys & Girls' by Henry Gilbert; 'Stories from Le Morte D'Arthur and the Mabinogion' by Beatrice Clay; 'King Arthur and the Knights of the Round Table' by Rupert S. Holland; 'The Marvellous History of King Arthur in Avalon' by Geoffrey of Monmouth; 'Gawayne and the Green Knight: A Fairy Tale' by Charlton Miner Lewis; 'Merlin's Youth' by George Parker Bidder; 'Sir Gawain and the Lady of Lys' translated by Jessie L. Weston; 'Merlin the Enchanter' by Thomas Wentworth Higginson; 'King Arthur at Avalon' by Thomas Wentworth Higginson; 'Sir Lancelot of the Lake' by Thomas Wentworth Higginson; 'Sir Gawain and the Green Knight' translated by Jessie Weston; 'The Story of the Champions of the Round Table' by Howard Pyle; 'A Knyght Ther Was' by Robert F. Young; 'The Egyptian Maid or The Romance of the Water-Lily' by William Wordsworth; 'Merlin and Vivien' by Lord Alfred Tennyson; 'Merlin's Song' by Ralph Waldo Emerson; 'Gawain and the Lady of Avalon' by George Augustus Simcox; and 'The Marriage of Sir Gawaine' by Bishop Thomas Percy.
FantasyFictionShort StoriesThriller

King Arthur Super Pack
Copy and paste the code into your website.
New here? Learn how to read digital books for free