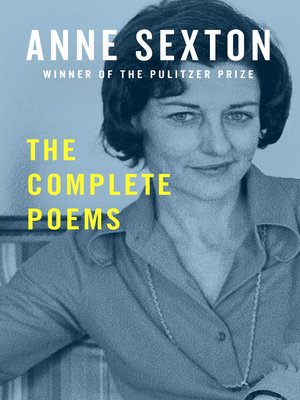 View more libraries...
The collected works of Anne Sexton showcase the astonishing career of one of the twentieth century's most influential poets
For Anne Sexton, writing served as both a means of expressing the inner turmoil she experienced for most of her life and as a therapeutic force through which she exorcised her demons. Some of the richest poetic descriptions of depression, anxiety, and desperate hope can be found within Sexton's work. The Complete Poems, which includes the eight collections published during her life, two posthumously published books, and other poems collected after her death, brings together her remarkable body of work with all of its range of emotion.

With her first collection, the haunting To Bedlam and Part Way Back, Sexton stunned critics with her frank treatment of subjects like masturbation, incest, and abortion, blazing a trail for representations of the body, particularly the female body, in poetry. She documented four years of mental illness in her moving Pulitzer Prize–winning collection Live or Die, and reimagined classic fairy tales as macabre and sardonic poems in Transformations. The Awful Rowing Toward God, the last book finished in her lifetime, is an earnest and affecting meditation on the existence of God. As a whole, The Complete Poems reveals a brilliant yet tormented poet who bared her deepest urges, fears, and desires in order to create extraordinarily striking and enduring art.