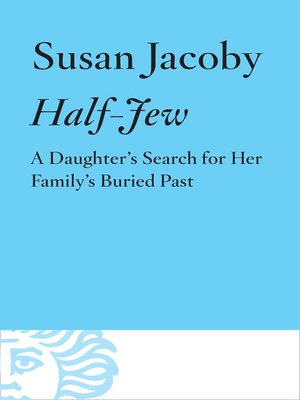 Biography & AutobiographySociologyNonfiction
Since childhood, Susan Jacoby, the New York Times bestselling author of The Age of American Unreason, was sure that her father was keeping a secret. At age twenty, just before beginning her writing career as a reporter for the Washington Post, she learned the truth: Robert Jacoby, a Catholic convert with a Catholic wife, was also a Jew.

In Half-Jew, Jacoby grapples with the hidden identity cloaked by the persona of a successful accountant and member of St. Thomas Aquinas Church in East Lansing, Michigan—and with the secrets and lies that had marked her family's history for three generations on two continents.

Beginning in 1849 when her great-grandfather arrived in America as a political refugee, Jacoby traces her lineage through the lives of her great-uncle Harold, the distinguished astronomer whose map of the constellations is etched on the ceiling of Grand Central Terminal; her uncle, the bridge champion Oswald Jacoby, her aunt Edith, also a Catholic convert and eventually a reformer within the church; and, of course her father himself. At the core of story is the psychic damage that accrues across generations when people conceal their true ethnic and religious origins.

Featuring a new afterword, Half-Jew is a meticulously researched, emotionally poignant examination of the dark legacy of European and American anti-Semitism as well as a tender-hearted account of a daughter coming to understand her father, herself, and her family's true legacy.
Biography & AutobiographySociologyNonfiction

Susan Jacoby is the author of seven books, including Freethinkers: A History of American Secularism and Wild Justice, a Pulitzer Prize finalist. A frequent contributor to national magazines and newspapers, she is also a consultant on programming f...

More about Susan Jacoby
Half-Jew
Copy and paste the code into your website.
New here? Learn how to read digital books for free