Not So Golden State 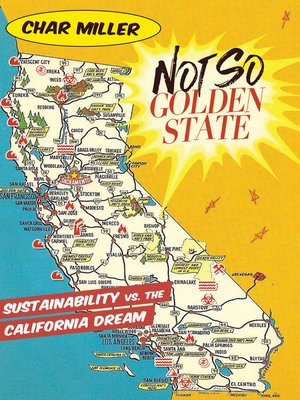 View more libraries...
In Not So Golden State, leading environmental historian Char Miller looks below the surface of California's ecological history to expose some of its less glittering conundrums. In this necessary work, Miller asks tough questions as we stand at the edge of a human-induced natural disaster in the region and beyond. He details policy steps and missteps in public land management and examines the impact of recreation on national forests, parks, and refuges, assessing efforts to restore wild land habitat, riparian ecosystems, and endangered species.
Why, during a devastating five-year drought, is the Central Valley's agribusiness still irrigating its fields as if it were business as usual? What's unusual, Miller reveals, is that northern counties rich in groundwater sell it off to make millions while draining their aquifers toward eventual mud.
Why, when contemporary debate over oil and gas drilling questions reasonable practices, are extractive industries targeting Chaco Canyon National Historic Park and its ancient sites, which are of inestimable value to Native Americans? How do we begin to understand “local," a concept of hope for modern environmentalism? After all, Miller says, what we define as local determines how we might act in its defense.
To inhabit a place requires placed-based analyses, whatever the geographic scope—examinations rooted in a precise, physical reality. To make a conscientious life in a suburb, floodplain, fire zone, or coastline requires a heightened awareness of these landscapes' past so that we can develop an intensified responsibility for their present condition and future prospects. Building a more robust sense of justice is the key to creating resilient, habitable, and equitable communities.
Miller turns to Aldo Leopold's insight that “all history consists of successive excursions from a single starting point," a location humans return to "again and again to organize another search for a durable scale of values." This quest, a reflection of our ambition to know ourselves in relation to time and space, to organize our energy and structure our insights, is as inevitable as it is unending.
Turning his focus to the tensions along the California coastline, Miller ponders the activities of whale watching and gazing at sea otters, thinking about the implications of the human desire to protect endangered flora and fauna, which makes the shoreline a fraught landscape and a source of endless stories about the past and present.
In the Los Angeles region these connections are more obvious, given its geography. The San Gabriel Mountains rise sharply above the valleys below, offering some of the steepest relief on the planet. Three major river systems—the Santa Ana, San Gabriel, and Los Angeles—cut through the range's sheer canyons, carrying an astonishing amount of debris that once crashed into low-lying areas with churning force. Today the rivers are constrained by flood-control dams and channels. Major wildfires, sparked by annual drought, high heat, and fierce Santa Ana winds, move at lightning speed and force thousands to flee.
The city's legendary smog, whose origins lie in car culture, was fueled in part by oil brought to the region's surface in the late nineteenth century. It left Angelenos gasping for breath as climatic conditions turned exhaust into a toxic ozone layer trapped by the mountains that back in the day were hard to see. Clearing the befouled skies took decades.
Every bit as complex is the enduring effort to regenerate riparian health and restore wildlife habitat in a concrete-hardened landscape. The emerging tensions are similar to those threading through the U.S. Forest Service's...