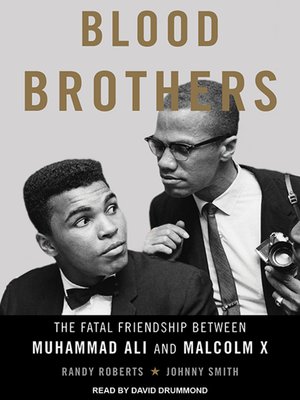 The Fatal Friendship Between Muhammad Ali and Malcolm X

Biography & AutobiographySociologyNonfiction
In 1962, boxing writers and fans considered Cassius Clay an obnoxious self-promoter, and few believed that he would become the heavyweight champion of the world. But Malcolm X, the most famous minister in the Nation of Islam-a sect many white Americans deemed a hate cult-saw the potential in Clay, not just for boxing greatness, but as a means of spreading the Nation's message. The two became fast friends, keeping their interactions secret from the press for fear of jeopardizing Clay's career. Clay began living a double life-a patriotic "good Negro" in public, and a radical reformer behind the scenes. Soon, however, their friendship would sour, with disastrous and far-reaching consequences. Based on previously untapped sources, from Malcolm's personal papers to FBI records, Blood Brothers is the first book to offer an in-depth portrait of this complex bond. Acclaimed historians Randy Roberts and Johnny Smith reconstruct the worlds that shaped Malcolm and Clay, from the boxing arenas and mosques, to postwar New York and civil rights-era Miami.
Biography & AutobiographySociologyNonfiction

Randy Roberts is a distinguished professor of history at Purdue University. An award-winning author, he has written biographies of iconic athletes and celebrities, including Jack Johnson, Jack Dempsey, Joe Louis, Bear Bryant, and John Wayne. He li...

Johnny Smith is an assistant professor of American history at Georgia Tech. He is the author of The Sons of Westwood: John Wooden, UCLA, and the Dynasty that Changed College Basketball. He lives in Atlanta, Georgia.

More about Johnny Smith
Blood Brothers
Copy and paste the code into your website.
New here? Learn how to read digital books for free