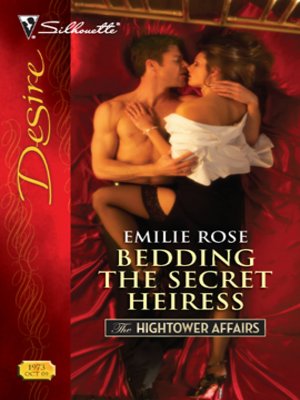 
Gage Faulkner is the enemy--her half-brother's spy. At least that's what newly discovered Hightower heiress Lauren Lynch keeps telling herself. Despite the thrill this pilot feels at the rich, gorgeous businessman's sudden interest, she knows what he's really after: proving she's a fortune hunter.

Gage's mind tells him Lauren is hiding something. His body tells him he wants her anyway. And her body...well, it tells him the feeling is mutual. The Hightowers want him to prove she's a gold digger, but the pain in her eyes is real. The truth is crucial, and he'll do anything to uncover it--even seduce her.
FictionRomance

More about EMILIE ROSE
Bedding the Secret Heiress
Copy and paste the code into your website.
New here? Learn how to read digital books for free