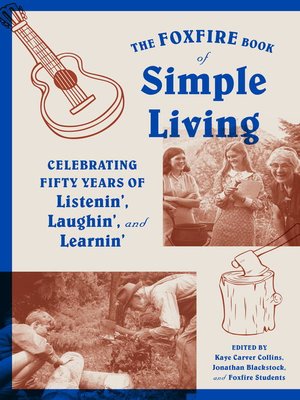 The Foxfire Book of Simple Living

CraftsHistorySociologyNonfiction
First published in 1972, The Foxfire Book was a surprise bestseller that brought Appalachia's philosophy of simple living to hundreds of thousands of readers. Whether you wanted to hunt game, bake the old-fashioned way, or learn the art of successful moonshining, The Foxfire Museum and Heritage Center had a contact who could teach you how with clear, step-by-step instructions.
Today, Foxfire's mission remains the same, and The Foxfire Book of Simple Living is both a rich look back at five decades of collected wisdom, as well as an intriguing look forward at the artists and craftsman who are working to preserve the Appalachian tradition for future generations. We hear from doll and soap makers who continue to use and adapt the time-tested methods outlined in The Foxfire Book, not to mention hunters, blacksmiths, musicians, and carpenters whose respect for those who preceded them enhances their own art. We see how the mountain community has responded to the films, books, and plays that have tried (and sometimes failed) to represent them. And, above all, by listening to the voices of those who came before, we celebrate the people who have preserved the stories, crafts, and customs that define life in the Appalachian mountain region.
CraftsHistorySociologyNonfiction

Founded in 1966, FOXFIRE is a nonprofit education organization. Foxfire's learner-centered, community-based approach is advocated through The Foxfire Museum and Heritage Center and grounded in the Southern Appalachian culture that promotes a sense...

More about Foxfire Fund, Inc.
The Foxfire Book of Simple Living
Copy and paste the code into your website.
New here? Learn how to read digital books for free