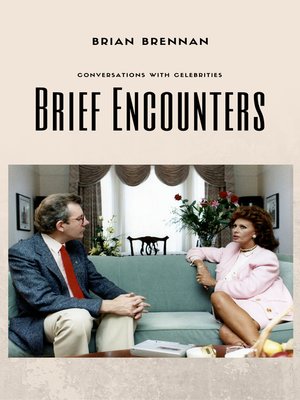 Famous actors, writers and singers invariably let their guard down when Brian Brennan interviewed them for the Calgary Herald and Toronto Star because they didn't think a Canadian journalist would be out to "get" them like the tabloid reporters in Britain and the U.S.

As a result, Brennan learned little-known facts about their lives and careers that the stars had never revealed publicly before.

Country singer Tammy Wynette, then recently married for the fourth time, admitted the relationship was already on the rocks because she had to be constantly on the road playing concerts and nightclub gigs. She divorced soon after she left Canada, when she returned to her home in Nashville.

Pop crooner Al Martino disclosed that his singing career took a turn for the worse after he played the troubled wedding singer in the movie The Godfather. The character was loosely based on Frank Sinatra, who developed such a hatred for Martino after the movie was released that he refused to find casino gigs for him in Las Vegas.

There are many more revelations in this must-have compendium of 63 celebrity profiles derived from newspaper interviews Brennan conducted during his fifteen years as an arts and entertainment reporter.

Add this book to your library today and you'll be a hit at the dinner table when you dispense your tantalizing tidbits about such stars of stage and screen as Judy Collins, Chuck Berry, Sophia Loren and Tennessee Williams.