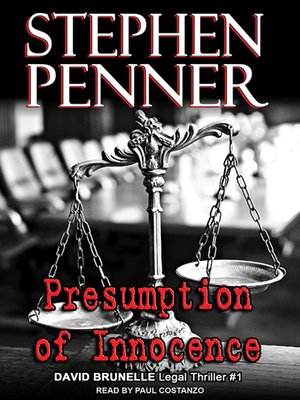 FictionLiteratureSuspenseThriller
Homicide prosecutor David Brunelle faces the most difficult case of his career. An innocent young girl is murdered in a heinous, unforgivable way. The only evidence against the killer is the full confession of his accomplice-another young girl he also victimized. But the accomplice is charged with the murder as well, which means that she has the right to remain silent. And she's so scared of the killer, she refuses to take a deal to testify against him. Brunelle can't just let the murderer walk, but how can he get a conviction when he has no admissible evidence and the killer is protected by the presumption of innocence?
FictionLiteratureSuspenseThriller

Stephen Penner is an author, attorney, and adjunct law professor from Seattle, Washington. He writes a variety of fiction, including thrillers, science fiction, and mysteries. His works include the paranormal mystery Scottish Rite, the science fic...

More about Stephen Penner
Presumption of Innocence
Copy and paste the code into your website.
New here? Learn how to read digital books for free