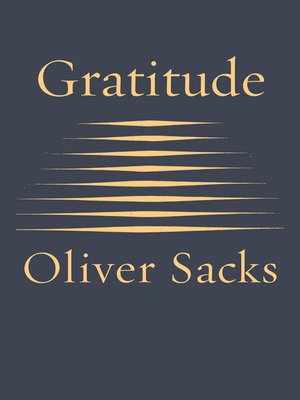 Biography & AutobiographyLiterary CriticismPhilosophyNonfiction
A deeply moving testimony and celebration of how to embrace life.
In January 2015, Oliver Sacks was diagnosed with a recurrence of cancer, and he shared this news in a New York Times essay that inspired readers all over the world: "I cannot pretend I am without fear. But my predominant feeling is one of gratitude.... Above all, I have been a sentient being, a thinking animal, on this beautiful planet, and that in itself has been an enormous privilege and adventure."
Gratitude consists of four essays that originally appeared in The New York Times, accompanied by a foreword that describes the occasion of each chapter. The foreword is written by Billy Hayes, Oliver Sacks's partner, and Kate Edgar, his long time collaborator.
Biography & AutobiographyLiterary CriticismPhilosophyNonfiction

Oliver Sacks, a physician and writer, was the author of thirteen books, including the global bestsellers, Awakenings (made into an award-winning film starring Robin Williams as Oliver Sacks), The Man Who Mistook His Wife for a Hat, Musicophilia, a...

More about Oliver Sacks
Gratitude
Copy and paste the code into your website.
New here? Learn how to read digital books for free