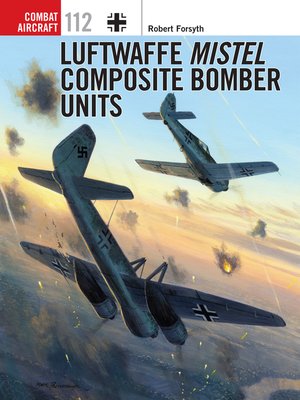 The striking appearance of Luftwaffe's Mistel Composite attack aircraft might seem ridiculous to modern eyes, but employed correctly, these original 'fire and forget' weapons were devastatingly effective, as Allied sources testify. This book draws on a wealth of first-hand reports and revealing contemporary photographs to tell the full, strange story of the Mistel units. They were the product of a remarkable mix of desperation and innovation, and were actually grounded in a pre-war, non-military practise – the mounting of one aircraft atop another was initially conceived to extend the ranges of passenger and mail-carrying aircraft. But as early as 1942, German planners saw the potential for use as a guided missile, and by the end of the war, the sight of a Ju-88 lashed to a BF 109 or FW 190 fighter bearing down on an Allied target was not as rare as one might expect.
This is a comprehensive account of the Mistel units, from their design and development, through the first deployments at D-Day, to the last, desperate missions against key bridges on the Oder and the Neisse in the final weeks of the war.