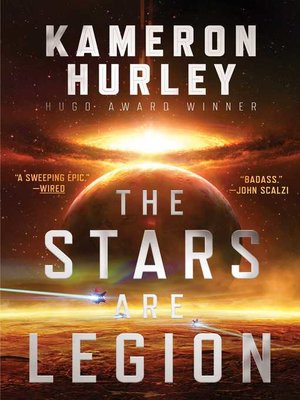 The Stars Are Legion

"One of the most unusual and powerfully disturbing space operas we're likely to see this year." —Chicago Tribune

Set within a system of decaying world-ships travelling through deep space, this breakout novel of epic science fiction follows a pair of sisters who must wrest control of their war-torn legion of worlds—and may have to destroy everything they know in order to survive.
Somewhere on the outer rim of the universe, a mass of decaying world-ships known as the Legion is traveling in the seams between the stars. Here in the darkness, a war for control of the Legion has been waged for generations, with no clear resolution.

Zan wakes with no memory, prisoner of a people who say there are her family. She is told she is their salvation, the only person capable of boarding the Mokshi, a world-ship with the power to leave the Legion. But Zan's new family is not the only one desperate to gain control of the prized ship. Zan finds that she must choose sides in a genocidal campaign that will take her from the edges of the Legion's gravity well to the very belly of the world.

In the tradition of Iain M. Banks's Culture novels and Roger Zelazny's Chronicles of Amber, Kameron Hurley has created an epic and thrilling tale about tragic love, revenge, and war as imagined by one of our most celebrated new writers.
FictionScience Fiction

Kameron Hurley is the acclaimed author of the novels God's War, The Mirror Empire, and The Light Brigade. Hurley has been awarded two Hugo Awards, the Kitschky Award for Best Debut Novel, and has also been a finalist for the Nebula Award, the Arth...

More about Kameron Hurley
The Stars Are Legion
Copy and paste the code into your website.
New here? Learn how to read digital books for free