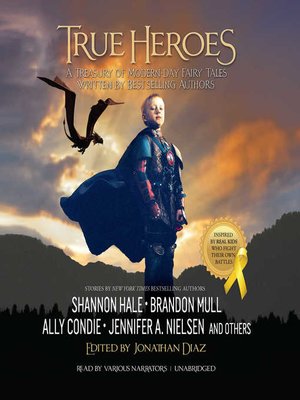 A Treasury of Modern-Day Fairy Tales Written by Bestselling Authors

FantasyJuvenile FictionShort Stories
An encouraging collection of short stories by bestselling middle-grade authors.This one-of-a-kind treasury brings together the talents of nearly two dozen bestselling middle-grade authors including Shannon Hale, Brandon Mull, Ally Condie, and Jennifer A. Nielsen—who have created original short stories and modern-day fairy tales, based on the lives and dreams of children they have met who all have two things in common: they have very big hopes and dreams, and they are all cancer patients. Each short story is prefaced by a brief bio of the child and is accompanied by photographs of the child, fully costumed and digitally inserted into a background—a baker, a dancer, a superhero, a dragon fighter, a sports star, a princess, and more—that makes them the hero of their own modern-day fairy tale story written by one of their favorite authors.
FantasyJuvenile FictionShort Stories

Shannon Hale is the author of multiple award-winning young adult novels, including Austenland and the New York Times bestselling Princess Academy, which is also a Newbery Honor book. Her first book, The Goose Girl, was an ALA Top Ten Book for Youn...

Jennifer A. Nielsen is the acclaimed author of the New York Times and USA Today bestselling Ascendance Trilogy: The False Prince, The Runaway King, and The Shadow Throne. She has also written the historical thriller A Night Divided and the histori...

More about Jennifer A. Nielsen

Brandon Mull is the author of the New York Times, USA Today, and Wall Street Journal bestselling Beyonders and Fablehaven series, which have developed large followings. He resides in Utah with his wife and children.

Ilima Todd was born and raised on the north shore of Oahu and dives for octopus with her dad every time she visits—otherwise she's diving into books in the Rocky Mountains where she lives with her husband and four children. She graduated from BYU ...

Kristyn Crow was born in Southern California, the eldest of seven children. She is the author of Skeleton Cat, Bedtime in the Swamp, and the Zombelina series.

Sara B. Larson can't remember a time when she didn't write books, although she now uses a computer instead of a Little Mermaid notebook. She lives in Utah with her husband and their three children.

More about Sara B. Larson

Tyler Whitesides has always loved telling stories. Growing up, he was even willing to do extra housework if his mom let him type his stories on the computer. He has worked as a music teacher, taste tester, and janitor. He lives in Logan, Utah, wit...

Jonathan Diaz is an attorney by day and a photographer by night. When he isn't taking photographs of mermaids, dragon riders, and fairies, he enjoys spending time with his wife and family.

Clint Johnson has written a number of books on the Civil War, including the acclaimed Civil War Blunders. Originally from Florida, he counts Confederate soldiers from Florida, Georgia, and Alabama among his ancestors. He is active as a Civil War ...

Ally Condie is the author of the Matched trilogy, a #1 New York Times and international bestseller. Matched was chosen as one of YALSA's 2011 Teens' Top Ten as well as one of Publishers Weekly's Best Children's Books of 2010. She is a former high ...

Liesl Shurtliff is the author of Rump: The True Story of Rumpelstiltskin. A graduate of Brigham Young University, she now lives in Chicago with her husband and children.

Linda Gerber recently returned to life in the Midwest after four years in Japan, where she served as the Regional Advisor for the Society of Children's Book Writers and Illustrators. She currently lives and writes in Dublin, OH, blissfully ignorin...

True Heroes
Copy and paste the code into your website.
New here? Learn how to read digital books for free