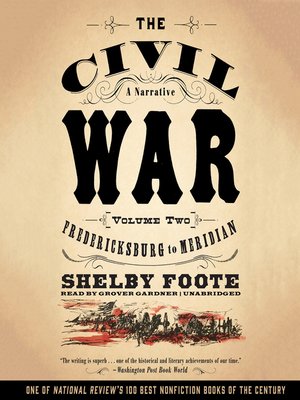 The Civil War: A Narrative, Volume 2

HistoryMilitaryNonfiction
The Civil War: A Narrative, Vol. 2 continues one of the most remarkable works of history ever fashioned. Focusing on the pivotal year of 1863, the second volume in Shelby Foote's masterful narrative history brings to life some of the most dramatic and important moments in the Civil War, including the Battle of Gettysburg and Grant's Vicksburg Campaign.The word narrative is the key to this book's extraordinary incandescence and truth: the story is told entirely from the point of view of the people involved. One learns not only what was happening on all fronts but also how the author discovered it during his years of exhaustive research.This is a must-listen for anyone interested in one of the bloodiest wars in America's history.
HistoryMilitaryNonfiction

Shelby Foote (1916–2005) was an American historian and novelist who came from a long line of Mississippians. After attending the University of North Carolina, he served in World War II as a captain of field artillery in the European theater. He wr...

More about Shelby Foote
The Civil War: A Narrative, Volume 2
Copy and paste the code into your website.
New here? Learn how to read digital books for free